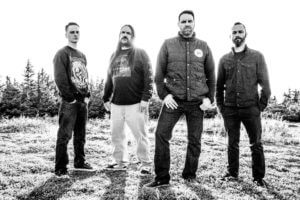 With the resounding success of last year’s festival, KRANK’D UP has gone from roots to branches in the space of 3 short years. Continuing with this ascent, Turning Tricks Entertainment proudly welcomes international stalwarts, 36 CRAZYFISTS to South Africa as special headlining act at KRANK’D UP 2015.

As one of the hardest working bands on the planet, Alaska’s 36 CRAZYFISTS has delivered relentlessly powerful live performances since their formation in 1994. Having developed a cult following the world over and carrying tons of experience thanks to massive tours with bands such as Killswitch Engage, Chimaira and various Download Festival appearances under their belts, South Africa is next on the band’s hitlist! Hot off the release of their excellent sixth studio album, Time And Trauma, 36 CRAZYFISTS are ready to blow minds at KRANK’D UP 2015.

Watch 36 CRAZYFISTS’ “Also Am I” music video below:

36 CRAZYFISTS will be joined by an exceptional South African rock and metal line-up and another epic international band yet to be announced.

Across two stages, KRANK’D UP will be held at Sundowners, Alberton, on September 26, 2015. First phase tickets open on Friday, 15 May. Don’t miss out on what promises to be a monumental event!

Limited VIP packages available at R550 each by contacting krankdup@gmail.com

Tickets are on sale nationwide through www.computicket.com from 15th May, as well as at Computicket outlets and Checkers stores.

Keep up to date with the latest KRANK’D UP news and announcements by joining the official Facebook page: www.facebook.com/KrankdUpMusicFestival

KRANK’D UP 2015 IS SPONSORED BY JAGERMEISTER, and MUSIC CONNECTION.