After having toured with the likes of Killswitch Engage, Protest the Hero, Architects, and Darkest Hour, Cleveland, Ohio’s metal warriors, AFFIANCE, will be embarking on their first-ever South African tour in March 2014. The tour will culminate with a special headlining performance at Sunfest 5.

Noted for their energetic mix of modern metal and old school influences, along with vocalist Dennis Tvrdik’s impressive range, AFFIANCE is ready to show South African fans what the metal community has been raving about. Alter the Press described them as “a band that is engaging, melodic, and hard,” while Rock Revolt Magazine declared that they’re “what true rock and metal fans long for: melodic metal with soaring vocals and driving guitars” – even locally, their hilarious Guitar Hero-themed music video for “Call to the Warrior” became a firm favourite on the popular alternative music programme MK Ondergrond.

Watch AFFIANCE’s “Call to the Warrior” music video below: 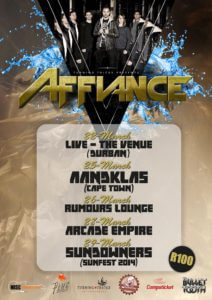