Arno will be promoting the release of the album with the Arno Carstens Big Band Summer Sessions Tour which runs nationwide from the 12th January to the 30th March 2014.  New tour dates will be added weekly to www.arnocarstens.com, so make sure you keep checking for updates as to when Arno will be performing at a venue near you.

Also watch out for free music download and new album promotional offers on www.arnocarstens.com leading up to the release of the album to music retail.

Arno started working with the SAMA winner Dan Roberts in June 2013, on a project to record a greatest hits album.  The intention was to re-write and record acoustically driven, orchestral versions of some of Arno’s most popular career tracks, both as a solo artist and as the frontman for SNG.

Two months later, they emerged from studio with something completely different.

As Dan says: “Arno would come into the studio and we’d be set up for Another Universe or something and then he’d have this idea from the night before…  So we’d digress and by lunch time have a brand new song going.   The sessions transformed almost as we began into to a pure creative process (as opposed to a re-creative one) and then just flowed from there.  It was a great process to be part of and I felt my job was to keep the energy flowing wherever which way it went and let it happen.  Arno is an artist in the real sense of the word, prolific, experimental and lyrically very strong.”

“The album is almost entirely made up of new songs, and completely inspired by my musical history, past and present” says Carstens. “We decided to keep Bubblegum on the album, the version we recorded worked very well with the new songs and I added two covers, which are so vastly different from the originals.  ACDC’s Highway to Hell was such a big part of my musical influence growing up and Sam and Dave’s Hold On (I’m Coming) was Dan’s idea and I love where the track took me.  When I went into the studio, my intention was to make an album of old hits for the fans that come to my acoustic shows, but what fate had in mind took us all by surprise.”

‘Lightning Prevails’ boasts a seductive departure from the comfortable and familiar Arno Carstens sound.   There are the same thought provoking, profound lyrics and melodies that soak into the skin, but this time the marriage of organic sound and electronic beats are made lusher, with a big brass section and the powerful backing vocals of Jamali’s Mariechan.

It’s an album about the unstoppable power of love and creation. 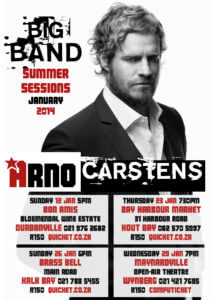