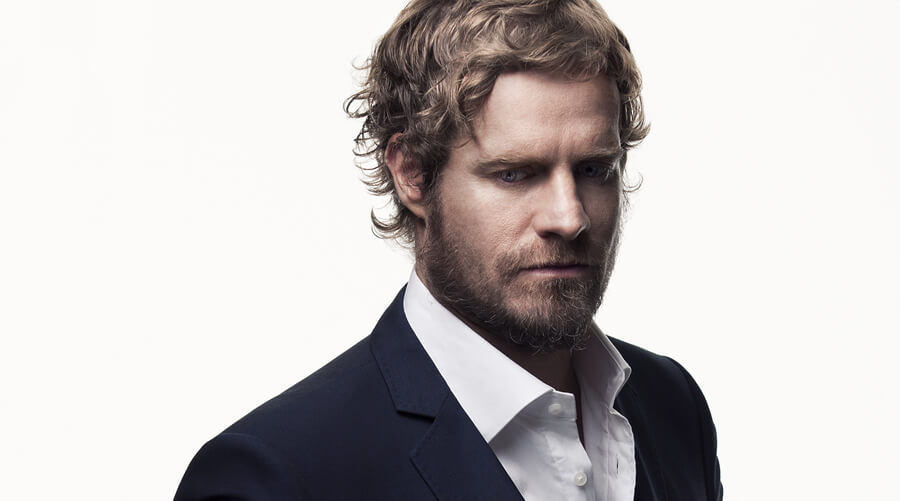 He’s had over 20 top ten singles and won 5 SAMA Awards including Best Rock Album in 2004 for Another Universe and Best Adult Contemporary Album in 2006 for The Hello Goodbye Boys.

During his 20 year career, Arno has performed with U2, The Rolling Stones and REM, among many others; headlined every major South African music festival; and performed at some of the most legendary and exclusive international music festivals including Isle of Wight, Glastonbury, V Festival and Hard Rock Calling.

Arno Carstens is also a celebrated fine artist, who paints in oils on canvas. The 2014 album cover for ‘Lightning Prevails’ was designed using an original painting done by Arno in 2006.

Arno’s live performance set includes the hits from his career as front man of The Springbok Nude Girls, many of the beloved and most celebrated songs from his career as a platinum selling, award winning English solo artist and some popular cover tracks. Arno performs a bilingual set, and includes the hits from the acclaimed album, “Die Aandblom 13”. The first single from the album, Ontwaak, recently won Song of the Year at the Bok radio annual awards and the music video has achieved over 115 000 views on YouTube.

In September 2016, Arno released his debut Afrikaans album, and to honour his roots, called it ‘Die Aandblom 13’. Thirteen tracks that tell loosely fact based stories about who he is and where he’s come from; he grew up in Worcester at Aandblom Straat 13, and still goes there as often as possible.

“Writing ‘Die Aandblom 13’ was a very different experience to the process of making any of my previous English albums. Afrikaans is obviously my mother tongue so I could really explore the essence of the language and as a resul, with this album, the songs evolved from poetry, and the music was added afterwards.

As fate would have it, my wife and I had to move back to Aandblom Straat 13 in Worcester in January this year, because the renovation on our house in Cape Town wasn’t yet complete. So I ended up writing a large portion of the album sitting on the bed in my parents bedroom, in the house where I had spent my entire youth, literally in the same place where I had learned to play guitar all those decades ago.” Arno Carstens, 2016

Once the album was completed, Arno went back to Aandblom Straat 13 to photograph the album cover artwork, so look closely at the album sleeve and you will see a montage of the inside of the house where he grew up. It’s truly a full circle album!

‘Another Universe’, Arno’s debut solo album, was released in 2003 and as one of the most anticipated solo projects in South African music history, did not disappoint, becoming the biggest selling South African English rock album this side of the millennium. The platinum selling album won a SAMA Award for Best Rock Album in 2004.

Arno Carstens’ debut UK album ‘Wonderful Wild’ released in 2010 was written, recorded and mixed in London & Spain with co-songwriting contributions from Giles Martin, James Walsh, Jim Duguid and Youth. The album was produced by legendary British producer Youth (The Verve’s Urban Hymns) and Jim Duguid (Paulo Nutini’s These Streets). Final mix on the album is by Tim Bran (The Verve’s recent UK#1 album). Hits from this album were playlisted on radio throughout UK and Europe.

2012 was a milestone year for Arno. Besides touring and recording with Springbok Nude Girls, and working on “Arno Plus” (Arno’s first solo art exhibition) with accompanying collaborative Blind Tiger sessions, Arno released his 4th solo album, which is the landmark 10th studio album of his 20-year music career.

Titled ‘Atari Gala’ (a Japanese translation that implies a warning cry or celebration) the album was written in part in New York, London, Johannesburg and Cape Town and produced by Arno and Brendan Jury.

“I painted the Japanese word “Atari” on a recent artwork, to mimic a bird singing a message of warning, which got me thinking that it could be a great name for a piece of music. Because this is my 10th studio album, I wanted to emphasize a kind of celebration, not only of the 12 tracks on this particular album, but of the whole creative process that has brought me thus far. Every song is an event or a tale, a celebration or a warning cry, that stems from life’s experiences,” Arno Carstens, 2013

In 2013 Arno started working with (producer) Dan Roberts with the intention to re-write and record an acoustically driven album to include some orchestral versions of some of his most popular career tracks. Two months later, they emerged from studio with something completely different.

The result, ‘Lightning Prevails’ was released in 2014 and boasts a seductive departure from the comfortable and familiar Arno Carstens sound. There are the same thought provoking, profound lyrics and melodies that soak into the skin, but this time the marriage of organic sound and electronic beats are made lusher, with a big brass section and the powerful backing vocals of Jamali’s Mariechan.

“The album is almost entirely made up of new songs, and completely inspired by my musical history, past and present. We decided to keep Bubblegum on my Boots on the album, the version we recorded worked very well with the new songs and I added two covers, which are so vastly different from the originals. ACDC’s Highway to Hell was such a big part of my musical influence growing up and Sam and Dave’s Hold On (I’m Coming) was Dan’s idea and I love where the track took me. When I went into the studio, my intention was to make an album of old hits for the fans that come to my acoustic shows, but what fate had in mind took us all by surprise.” Arno Carstens, 2014

Lightning Prevails is an album about the unstoppable power of love and creation.

“Lightning Prevails would appear to be his most chilled album and his most experimental. The songs, like so many of his others, are not commercially radio friendly. Yet he remains one of the most prolific songwriters and performers of our time.” Therese Owen, Tonight Sept 2014.

Arno Carstens has released the following albums, EP’s and DVD’s