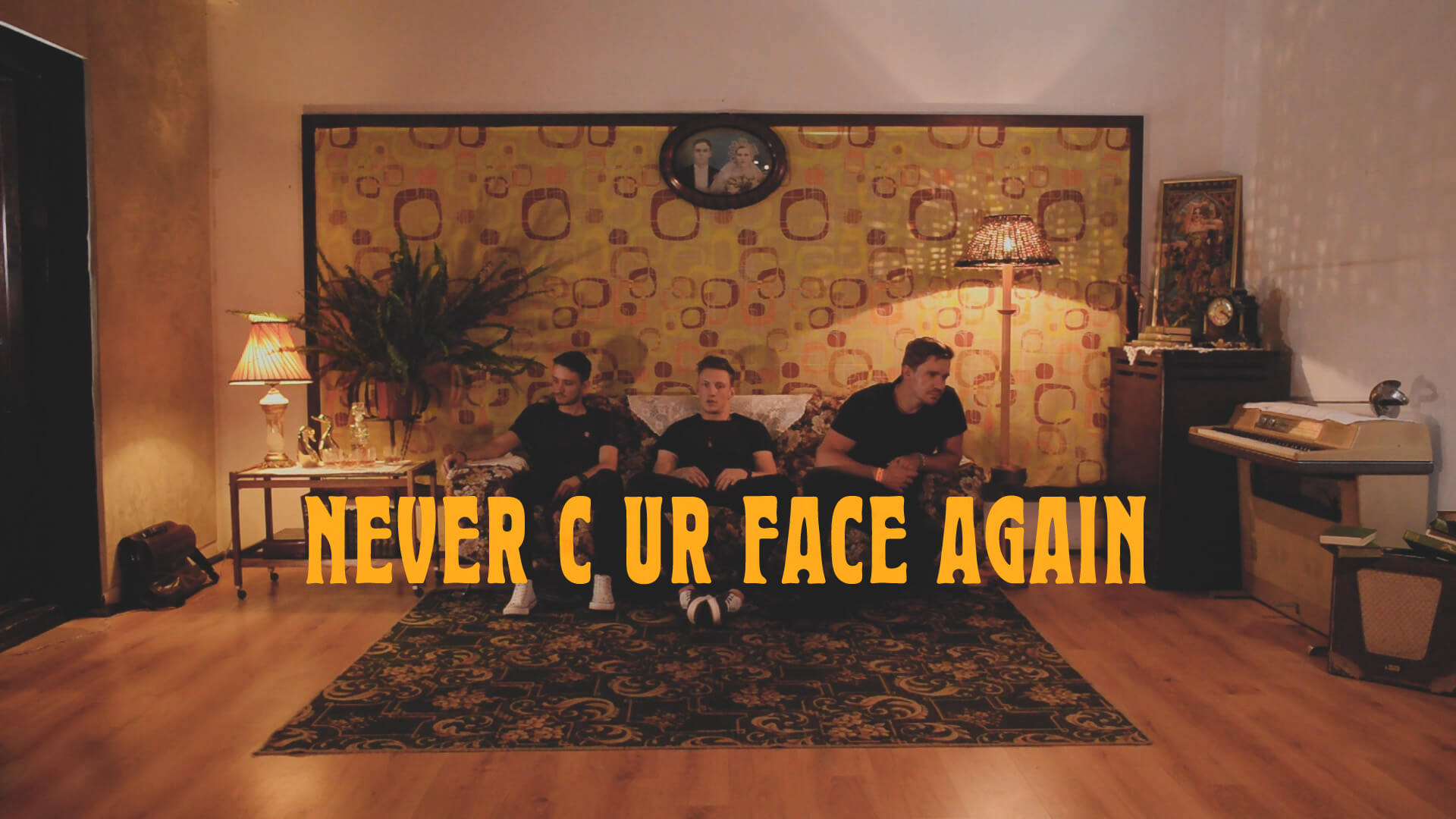 Corné comments, “Never C UR Face Again is our second music video, we decided to take a less serious route than we took with most of our other tracks. The song itself has a very “tongue-in-cheek” theme about it and was written after I had dreamt the melody and guitar line. I woke up in the middle of the night, still half asleep, and recorded the line on my phone. The next morning, I pretty much finished the structure, and we refined the song over a course of a few months. The idea of “be so good to never see your face again” must’ve been stuck in my subconscious and stemmed from those moments where you go on social media, and you see that certain person’s face. How one picture can completely mess up your day. The video was something we decided to keep simple, to give people a bit of a glimpse of what we’re like, especially those who haven’t seen us live. I’ve always been intrigued by the seventies, so building the set was a tonne of fun, and surprisingly easy. We just ended up taking a bunch of old crap from my parents’ house, and slapping doilies on everything. I’m also a big Hellcats fan, so getting Warwick to feature on the track was a dream come true. I’ve drawn a lot of inspiration and motivation from their live shows, and they’re so rad to hang out with.”

Warwick adds “Myself and the guys from GTR have been talking about doing a collaboration for a while. So, about a month or so back when Corné sent me the bones of the track he was interested in me playing on, I jumped on that shit immediately. The track itself was already a banger and pretty much done so I was cognisant not to add too much to it. I’m also not really a solo shredding show pony, I’ve never really cared for that type of guitar playing (partly because I’m just a lazy bastard)- so in the end I just stuck to what I knew and laid a filthy little riff on ‘never see you again’. It’s a rad song and I’m grateful to the lads for letting me lay some stank on it.

Watch the video for Never C UR Face Again

The track is available on all digital platforms including Go the Rodeo is a progressive electro rock band from the western outskirts of Johannesburg. Their current line-up consists of Robert Mitchley (bass guitar, backing vocals, keyboard), Corne van Niekerk (vocals, guitar) and Craig Atkinson (backing vocals, drums). Their sound is a blend of indie rock, pop, and blues influences, with electronic elements inspired by the likes of The Kills, Queens of the Stone Age, Twenty-One Pilots, The Neighbourhood, The XX, Alt-J, Chet Faker, Enter Shikari, and Tame Impala. Corné and Robert formed the duo after having done various music projects together. In the beginning of 2017 they emerged with a fresh sound, and were joined by Craig Atkinson, drummer for the electronic/post-hardcore band, Bombs and Issues. They released their debut single “Sea Dog” in May of 2017, and went on to release multiple other singles in quick succession, including “Glass Walls” featuring guest vocals from US post-hardcore band “Our Last Night”