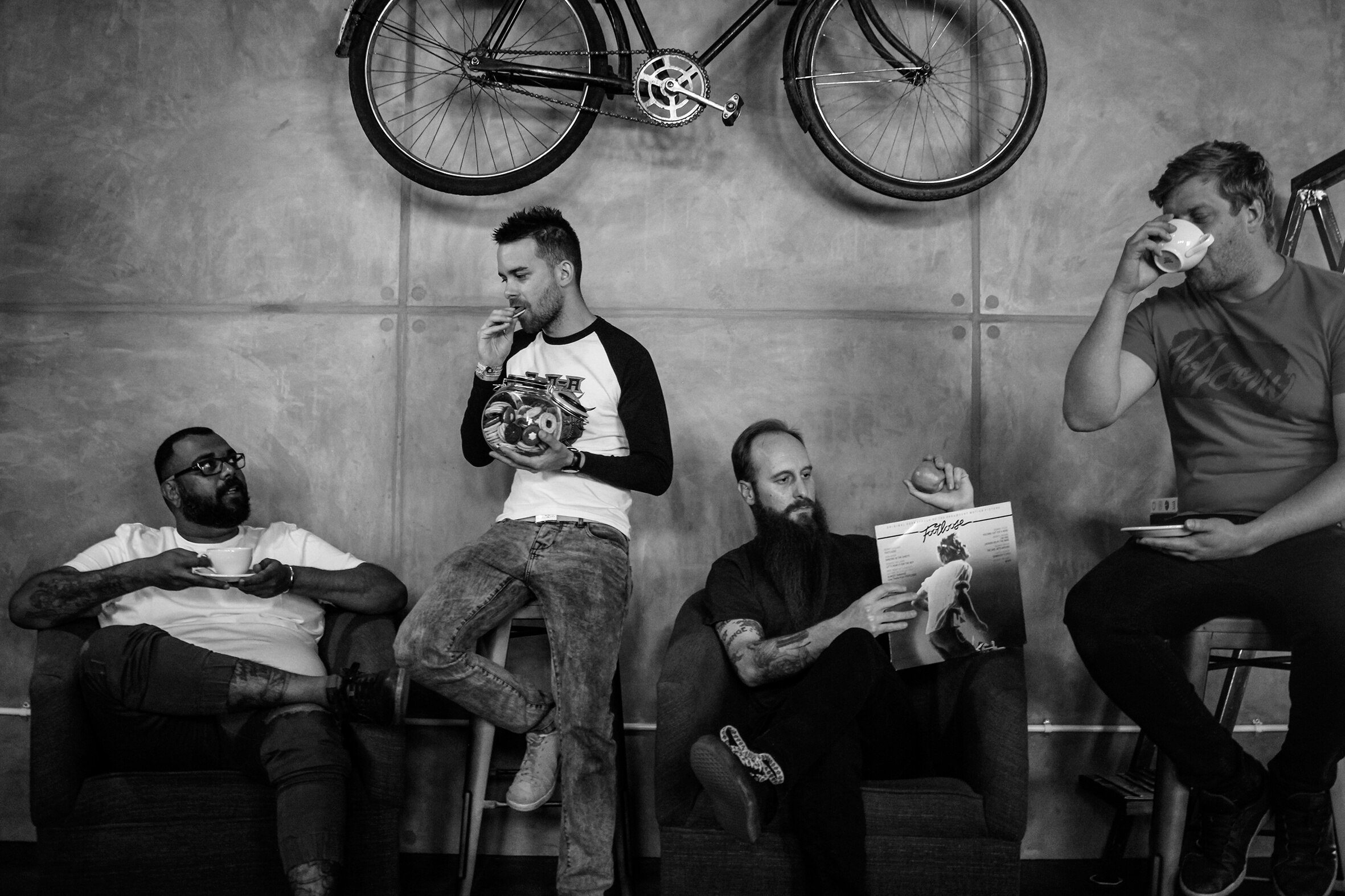 Continuing their ascension into the international touring market, it has been announced that Johannesburg stalwarts Deity’s Muse will be main support for UK prog-metal pioneers, Monuments on their Phronesis UK Summer Tour. The tour sees Deity’s Muse returning to the UK for a short run of dates supporting Monuments in Brighton, Norwich, Birmingham and Milton Keynes. The timing couldn’t be more perfect as Deity’s Muse is set to release a new EP leading up to the tour. Some additional Deity’s Muse UK tour dates will be announced soon in support of the band’s soon-to-be-released EP.

2018 saw many highlights present themselves to Deity’s Muse. They supported Seether during the band’s brief South African sojourn in May, had their video for “Walls Down” premiered by the legendary Metal Hammer
magazine, embarked on a successful UK tour in August which culminated in an unforgettable performance at Bloodstock Open Air festival on the Sophie Lancaster stage, followed by a local headline slot opening for SikTh and Miss May I in September at the ever-popular Krank’d Up music festival.

Progressive metal luminaries Monuments are back with their most innovative work yet in new album, Phronesis. The path to get there wasn’t an easy one, however. To support previous album, The Amanuensis,Monuments embarked on a two-year global journey. The transcontinental metallers sated fans and made new ones across Europe, Australia, South Africa, the United Kingdom, and the United States, sharing the stage with Protest the Hero, Animals As Leaders, Karnivool, After the Burial, and Devin Townsend. When Monuments returned home, it was time to heal up physically and mentally. The opportunity to mend minds and heal wounds not only fortified Monuments, it afforded primary songwriter John Browne space to craft Monuments’ best material to date. Coupled with vocalist Chris Barretto’s “blank slate” lyrical mandate, Phronesis isn’t about starting over but rather moving forward. While Gnosis and The Amanuensis paved the way for Monuments’ monumental return on Phronesis, it’s songs— really catchy songs—that set the multi-national outfit apart from just about any band on the planet. One listen to “A.W.O.L.,” “Vanta,” “Ivory,” “Leviathan,” and “The Watch” proves Monuments are on the leading edge of musical virtuosity, vocal superiority, and lyrical smarts. Progressive metal is ready for Monuments to take the genre to new heights with Phronesis. 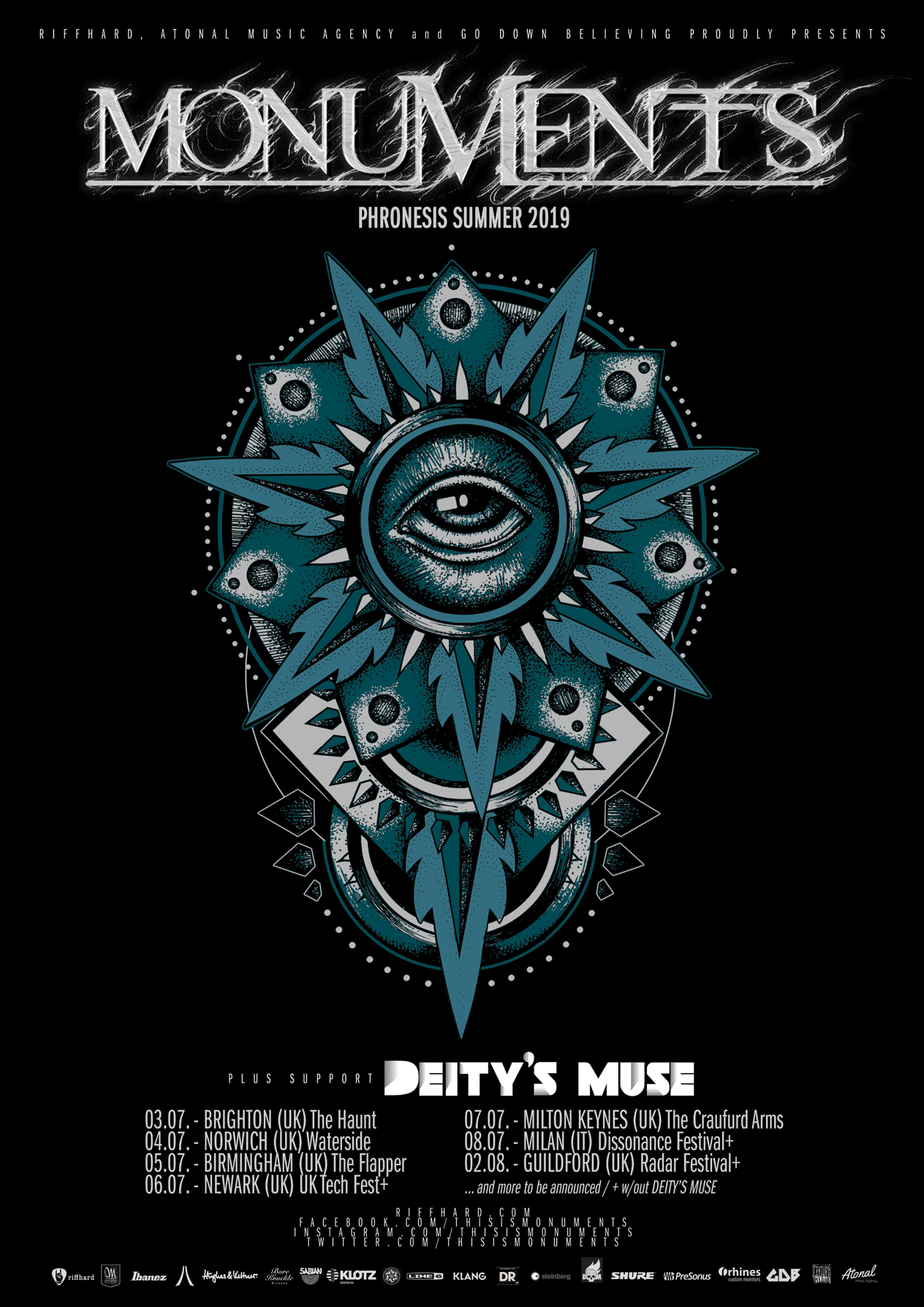 About Deity’s Muse:
Deity’s Muse is a melodic alternative rock band based in Johannesburg, South Africa. The band is an absolute juggernaut live and has featured on every major South African rock music festival. The band has shared stages in their home country opening for revered international acts such as Seether (US), Dead Letter Circus (Aus), Rise Against (US), Bring Me The Horizon (UK), Blind Guardian (GER), Unearth (US), Protest The Hero (CAN), Knorkator (GER), Affiance (US), Monuments (UK), 36 Crazyfists (US), Karnivool (Aus), Miss May I (US), SikTh (UK) and Blindside (SWE).
In October 2012 Deity’s Muse took part in their first ever international tour where they performed at world famous venues such as The Viper Room in Hollywood and The 100 Club in London. In April 2013 the band shared the RAMfest main stage with international heavyweights, Rise Against and Bring Me The Horizon. In September 2013 Deity’s Muse played two shows with Australian rock legends, Dead Letter Circus at The Assembly in Cape Town and Krank’d Up music festival in Johannesburg respectively.
In August 2014 the band made their first ever Oppikoppi Festival appearance. In September of the same year they performed on the main stage at Krank’d Up 2014 with Unearth and Protest The Hero. In November 2014 Deity’s Muse embarked on a South African tour with Australian heavyweights, Dead Letter Circus.
Deity’s Muse supported Australian prog-rock giants, Karnivool at the Johannesburg leg of their South African tour at the end of April 2016. 2016 also saw Deity’s Muse tour South Africa extensively in support of their latest release. The band supported UK prog pioneers, TesseracT on the Johannesburg leg of their South African tour in April 2017. In July 2017 the band was featured on Metal Injection’s “10 Great South African Bands You Have To Check Out” list. Following this, Deity’s Muse made their first European music festival appearance, performing at the 2017 edition of the annual Euroblast festival at Essigfabrik in Cologne, Germany in October which was headlined by Twelve Foot Ninja, Textures and Devin Townsend Project. In July 2017 Deity’s Muse received the ‘Album of the
Year’ award for Convergence at the annual South African Metal Music Awards ceremony. The album was produced by Clint Vincent, guitarist for Dead Letter Circus.
In May 2018 Deity’s Muse opened for Seether to 6,000 people at Marks Park in Johannesburg. Soon after, it was announced that Deity’s Muse had been confirmed to perform at Bloodstock Open Air 2018, effectively making them the first South African band to perform at this prestigious festival. Following this, Metal Hammer debuted the band’s video for “Walls Down” which received 15,000 views in 4 days on the metal publication’s Facebook page. In August of the same year, Deity’s Muse embarked on their first ever co-headlining UK tour with Sumer announced as tour mates. This UK tour culminated in the band’s performance at Bloodstock Open Air 2018, opening the Sophie Lancaster stage at 11am on the Friday to 2,500 people.