A Price On The Kings Head 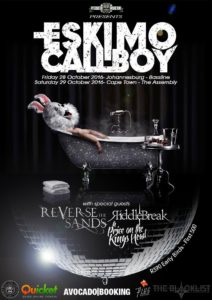 Eskimo Callboy have caused a proper furore since their formation in 2010, showing that the German music scene never fails to surprise. Superlatives are abound as soon as there’s any mention of the six guys from the small German town of Castrop Rauxel: lightning career, millions views on YouTube, sold out tours, the biggest festivals in the world, crazy shows and even crazier parties. It sounds like the ultimate rock star life, but there’s a lot of work behind it, particularly because the six guys do it all themselves. They write and produce their songs and albums, almost without exception. Their third album CRYSTALS was produced in the same way. With the exception of mastering, which was done by a friend, everything stayed in the band’s hands right to the end. This attitude has landed them on the wrong side of a few label mates, promoters and friends, because CRYSTALS turned into a real mammoth project. In the last three months alone, the album almost took another 180 degree turn, and this even though the band had not set a deadline for themselves this time. Eskimo Callboy had already built up pressure with their previous albums WE ARE THE MESS and BURY ME IN VEGAS, staying true to the motto “it’s only going to be great if we ourselves think it’s great”. To do that, Eskimo Callboy locked themselves in a cabin in the Netherlands for three weeks, breaking their routines and fully focusing on CRYSTALS. Far away from the comfort of your own couch, bed and friends, you can work even harder. The boot camp definitely paid off, as CRYSTALS shows new influences, variety, and may even surprise Eskimo Callboy fans.

One of the biggest surprises might be the song “Best Day”, which features the biggest German hip hop star, Sido. “I know people will hate us again for this song, but we always wanted to make a hip hop track. We think rap is awesome and we’d thought about who we could collaborate with for some time. These days, Sido doesn’t just have typical hip hop themes in his lyrics, so it was easy for us to imagine collaborating. We got in touch with Sido through our label. He liked what we do, and as easy as that, the deal was done.” Although at first glance the collaboration seems unusual, Eskimo Callboy have experimented with different styles and influences from the very start. Whether electronic, hardcore, pop or metal, the sextet has no genre boundaries. For this, you’ll either love or hate the band, who have stayed true to themselves since the very beginning, as Kevin says: “When we started the band and no one knew us yet, we did only what we wanted. Why should that change?”

Through their unconventional style, Eskimo Callboy have made friends but also met with harsh criticism and hostility. In particular, the oft-quoted guardians of the scene are a thorn in the band’s side. Since the band don’t see themselves as an “ordinary metal act”, they take such comments and criticism with humour, as you would expect, and don’t let themselves be dragged down. Overall, Eskimo Callboy is a unit, and decisions are made together, whether they’re about song writing, production or the stage show. Everyone gets involved so that songs, stage outfits and entire shows emerge from ideas and creative suggestions. Expectations from fans and audiences aren’t exactly getting any lower after their previous shows. Fortunately, Eskimo Callboy can be understood as a changeable work of art.

Eskimo Callboy – We Are The Mess (OFFICIAL VIDEO)

Eskimo Callboy – Is Anyone Up

A Price On The Kings Head

Tickets are available through www.quicket.co.za 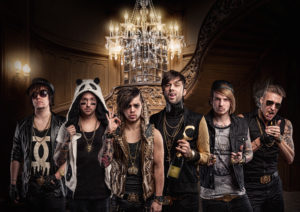