Tickets are available at www.quicket.co.za 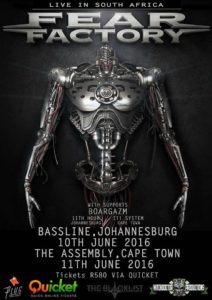 Fear Factory were one of the first bands to fuse the loud, crushing intensity of death metal with the cold harshness of industrial electronics and samples, producing a more varied sonic palette with which to express their bleak, pessimistic view of modern, technology-driven society. The group was formed in Los Angeles in 1990 by vocalist Burton C. Bell (formerly of Hate Face), percussionist Raymond Herrera, and guitarist and ex-Douche Lord Dino Cazares.

During the band’s career, they have released nine full-length albums and have evolved through a succession of styles, including industrial metal, death metal, groove metal, and thrash metal.  Fear Factory was enormously influential on the heavy metal scene in the mid-to-late 1990s. They disbanded in March 2002 following some internal disputes, but reformed later that year without founding member Dino Cazares, adding bassist Byron Stroud, and previous bassist Christian Olde Wolbers as guitarist.

In April 2009, a new line-up was announced. Cazares returned as lead and rhythm guitarist, and Gene Hoglan as drummer. Bell and Stroud reprised their respective roles, and the band completed a seventh studio album titled Mechanize. Fear Factory released its eighth studio album, The Industrialist, in June 2012. Their latest album, Genexus, was released in August 2015.

Over the years, Fear Factory has seen changes in its members, with lead vocalist Burton C. Bell being the only consistent member since 1989. The band has performed at three Ozzfests and the inaugural Gigantour. Its singles have charted on the US Mainstream Rock Top 40 and albums on the Billboard Top 40, 100, and 200. The band has sold more than a million albums in the U.S. alone. 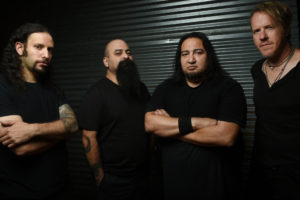