State Of The Nation – The debut EP from PitVirus 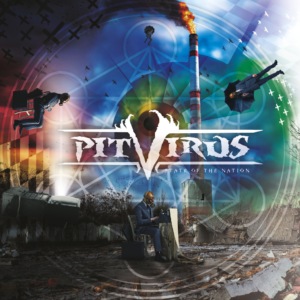 THE WORLD IS A PIT, AND WE ARE THE VIRUS.

PitVirus is a hard-rocking four-piece “supergroup” from Johannesburg, South Africa. With political and social commentary and catchy grooves, this is a modern protest band.

PitVirus began as the brainchild of Chris van der Walt (The Black Cat Bones, Boargazm) and Marc Junius (ex The Drift) who wanted to write dirty, gritty rock music. Industrial metal was a big influence at the time, with both founding members getting more than just one daily fix of Ministry. Meeting up at a music festival, they decided to go ahead with writing material.

Spontaneity was the name of the game, but the groove – which they felt was so often missing in the ultra-complex, noise-driven metal of this decade – was the most important item on the agenda.

After completing 20 rough ideas the basic tracks were demoed. Needing a drummer to complete the trio they asked Tom Hughes of Fuzigish and Haggis & Bong to have a listen. Tom’s hard-hitting drumming style was the perfect fit.

Tracking began at Tom’s studio, Sound Stables, in 2014. Tom worked his engineering magic and recording went by smoothly. Once the instrumental recording for the first five tracks was completed the search for a vocalist began.

Enter South African legend David Beretta Owens of Lithium and N8ive fame. After hearing the tracks Dave immediately said yes! PitVirus promised him everything he loves as a vocalist; from raw screams and catchy melodies to beautiful harmonies.

Focusing lyrically on real issues facing South Africa and the world in general, songs like Xeno Man, Shed my Load and Firepool emerged naturally from the slow and grinding or fast and punky hooks of the music, transforming them into anthems of protest.

Their EP entitled “STATE OF THE NATION” was released independently on 18 April 2016, and is available online at https://pitvirus.bandcamp.com.

The band is currently working on their first full-length album (all new songs) which they hope to release at the end of this year.

Here he learned the basics of touring, writing, recording and surviving as a musician. During his time with RhütZ Chris opened for international acts, played numerous festivals and toured neighbouring countries. These experiences inspired him to pursue his career in music.

With a mind to furthering his musical knowledge, he studied Film Sound and Jazz Guitar which gave him the necessary tools to express himself musically and opened a lot of industry doors.

Soon he was a part of Boargazm and The Black Cat Bones with both bands going on to headline major festivals in SA, play both local and international tours as well as allow Chris to put in a steadily growing amount of studio time.

PREVIOUS BANDS: THE DRIFT | ALL FORLORN

Marc’s career in music began with All Forlorn, thrashing all over South Africa for 6 years and releasing 2 albums which were well received by the underground metal scene.

Marc went on to work as a roadie and merch salesman for Haggis and Bong and had the privilege of filling in for their bassist on several occasions.

During this period Marc was also travelling the country working as a roadie for Fuzigish.

Marc then joined The Drift with whom he released two albums. The band gained international exposure by opening for Lamb of God on their South African tour as well as touring with Swiss band Dreamshade.

PitVirus is now Marc’s only focus as he aims to create honest, real material that comes from the heart.

Tom exploded onto the music scene in 2006 with metal band All Forlorn- releasing two albums, playing many of SA’s leading festivals and earning a few international support slots along the way.

In 2007 Tom co-founded bagpipe metal band, Haggis and Bong. Over the years the band has gone from a two piece experimental act busking at festivals to a six piece bagpipe metal experience. The band has enjoyed much success including being involved in the Commonwealth Games send-off gala.

In 2012, Tom joined South African ska punk legends Fuzigish. He describes this as a highlight of his career as he has shared the stage with many international acts.

Along the way Tom developed an insatiable interest in sound engineering and the recording process which led to him opening his own studio in 2013. He has been lucky enough to work with Wonderboom, Bloodline ltd, Reason to Live, Martin Rocka and the Sick Shop, Bleeding Spawn, Gunshot Blue, The Spinebenders, Them Bandits and Fever Dogs, to name but a few.

His free time has been occupied by session gigs in both the studio and on the stage, playing anything from country to death metal. Most recently, Tom was able to tour with his good friends, Boargazm, to Russia and the Baltic.

David Beretta Owens made his debut onto the South African music scene as frontman of the pioneering and revered 90’s rock outfit, Lithium.

When the members of Lithium decided to explore different musical avenues in 1999, Dave went on his own musical journey which saw him experiment with many genres and styles.

One of his biggest successes during this time was melodic rock band, N8ive, a group that impressed with philosophical lyrics and catchy hooks.

Through the years Dave has performed as an acoustic solo artist, supporting countless bands and artists.

His vocals can also be heard on albums by The Narrow, The Drift, Plum and Roswell Kings.