After the resounding success of the Eluveitie tour at the end of October Witchdoctor Productions are doing it again, this time with Finnish folk metal monsters FINNTROLL.

This will be the 1st time the band has played on African soil; they’ll be treating us to 2 exclusive shows at the end of November 2015.

The trolls of Nordic folklore are believed to be dirty creatures of enormous strength and appetite. Their grotesque physique grants them a comic element, although the humour tends to be on the grim side as these nocturne beings hunger for human flesh. Unsurprisingly, this has earned them a rather bad reputation. All things considered, FINNTROLL are the perfect embodiment of all aforementioned sentiments – although one might want to replace the hunger for human meat with an unquenchable thirst for booze.

Formed in 1997 in Helsinki, Finland they combine elements of black metal and folk metal. Finntroll’s lyrics are mostly in Swedish, the only exception being the song “Madon Laulu” on Visor Om Slutet. Finntroll’s original singer, Katla, decided to use Swedish over Finnish since he was part of a Swedish-speaking minority in Finland and the sound of the language seemed to better suit the band’s “trollish” outfit. Despite several vocalist changes, this tradition has continued.

According to band members Vreth and Skrymer, they took their name from an old Finnish legend where Swedish priests coming to Finland had an encounter with a wild-looking man who killed most of their party. The survivors came back bearing the tale of the Finn-Troll.

Finntroll’s lyrics mainly deal with legends and tales revolving around the fictional Troll-King “Rivfader” and the trolls fighting against the Christians who entered their lands and spread their beliefs. A recurring theme is the story of two priests named “Aamund” and “Kettil”. The first three full-length albums feature a rather short but fierce song about the two men who constantly get themselves into trouble with the trolls, only to get beaten up and mutilated over and over again by the wrathful followers of Rivfader. 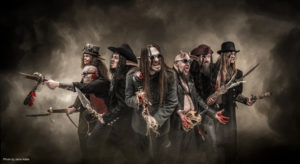