Witchdoctor Productions is very happy to announce that Washington D.C’s very own Metalcore powerhouse Darkest Hour will be bringing gracing our shores for 2 shows in December 2015. The band will be playing the album “Undoing Ruin” in its entirety, along with songs from their back catalogue spanning 20 years.

The Misery We Make – https://www.youtube.com/watch?v=da4RyMfAlWs

Love As A Weapon – https://www.youtube.com/watch?v=l5wSexIGURs

Formed in 1995, though failing to break early in their career, the band has received acclaim for their albums Undoing Ruin, Deliver Us, and The Eternal Return. Deliver Us debuted at number 110 on the Billboard album charts and their more recent effort The Eternal Return garnered them an even higher position in the Billboard album charts at number 104. Their latest self-titled effort charted at 102 on the Billboard 200, a peak for the band, and it marked a stylistic shift in the band’s discography. On Darkest Hour’s earliest recordings, the band showcased a sound in the vein of hardcore punk, but with the release of their debut album The Mark of the Judas, the band shifted their sound into a blend of melodic death metal and hardcore punk, with more emphasis on the melodic aspect of their sound, in what became known as metalcore. The band continued with this sound on their second release So Sedated, So Secure, but on their third release titled Hidden Hands of a Sadist Nation, the band brought their aggressive hardcore influence to the forefront, whilst still maintaining a sense of melody. On the band’s fourth and fifth releases, titled Undoing Ruin and Deliver Us, the band shifted into a more straight-forward melodic death metal direction, with vocalist John Henry beginning to incorporate clean vocals on the latter album. The band’s sixth release titled The Eternal Return took the band a step backwards to a sound similar of that to Hidden Hands of a Sadist Nation. With The Human Romance, the band returned to a melodic death metal-influenced sound, similar to that of Undoing Ruin. The band’s eponymous eighth album signalled a stylistic shift in the band’s discography, with the band adapting a more accessible and more upbeat style of metalcore.

Support for both shows will come from South Africa’s very own groove metal titans The Drift. They have just released their 2nd album “The Mountain Star”. 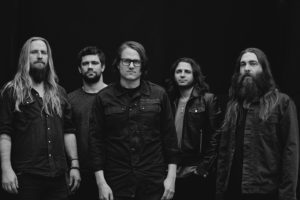