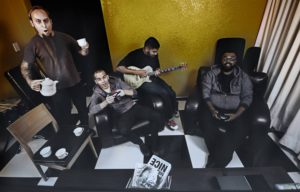 The atmospheric single from the band’s forthcoming album, Convergence, is out now!

Johannesburg-based groove rock machine Deity’s Muse has released its latest single, “Satellites”, which is off the Indiegogo funded album, Convergence. Recorded at Loudmouth and Convergence Studios and produced, mixed and mastered by Dead Letter Circus’ Clint Vincent, “Satellites” explores different sonic territories that will write a new chapter in the band’s 14 year history.

“‘Satellites’ is a game changer for us as a band. We had to rediscover ourselves as musicians with this song, tap into an energy we didn’t know we had and come up with something that we are super proud to share with you,” says drummer, Sashan Pillay.

“This song resonates with who we are right now. It shows our positivity and willingness to progress musically and as individuals. We’ve taken all that we have learnt over the years as a band and crammed that into this song. It’s the truest reflection of us and we’re damn proud of it.”

The forthcoming month will be a busy one as Deity’s Muse puts the final touches on Convergence and embarks on a five-date tour aptly dubbed the Satellites Tour. Indiegogo supporters were treated to an early preview of “Satellites” and the band promises that even more new music will be unleashed on this tour, so don’t miss out!