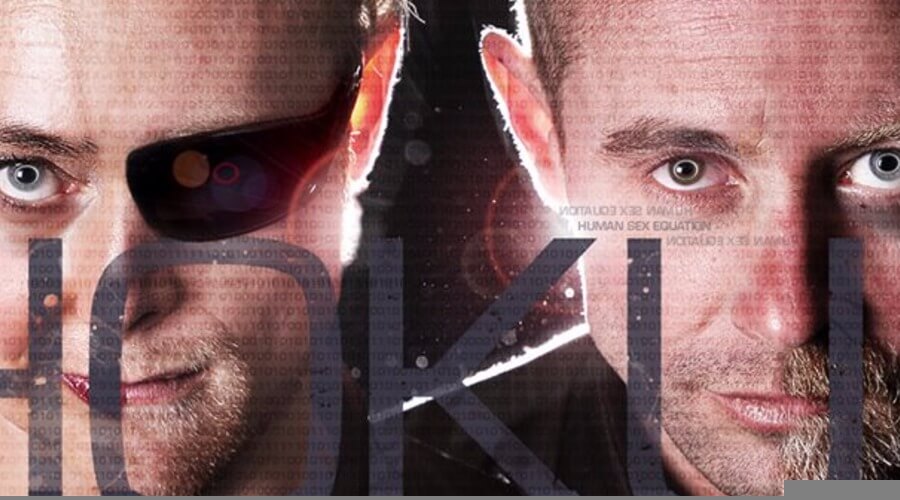 HOKUM is a four piece progressive rock band hailing from Johannesburg, South Africa: Scott Wareham (vocals/guitar), Jason Jackson (drums), Conrad de Jong (guitar) and Sarah Wolff (keyboards/piano).
Formed from the ashes of Marlowe, and with more than ten years experience, their sound ranges from sublime soundscapes (Brian Eno, Radiohead), the avant garde (Steve Reich, Philip Glass), to the solidity of rock (Deftones, Tool). And although these influences can be heard, their sound defies strict classification; they bring something new to rock music. They released their debut album, The Money Eaters, in June 2015, which can be downloaded on iTunes, or purchased in hard copy at their shows. They are gigging extensively throughout Gauteng at venues such as Sundowners, Rumours, Arcade Empire, The Bohemian and Wolmer Bush Lounge. Festivals played to date: Krank’d Up, Slamfest, Oppikoppi, Splashy Fen and Metal Feast. They have been playlisted on TUKS FM, various other Varisty and online radio stations, and have been featured artists on Mix FM’s Sunday afternoon Hangout show, hosted by Kerry-anne Allerston.
They have recently paired up with renowned sound engineer and producer, Jon Pentreath (BLK JKS, Cold Water Morning, Sun, The Muffinz), and are endorsed by SA Backline, the premier sound company in South Africa (providing sound and equipment for Big Concerts for artists such as Foo Fighters, Lionel Richie and Mariah Carey).

Acid Magus
19th May 2021
Connect on facebook
Cape Town based psychedelic punk rockers We Kill Cowboys release their new single and video "We Don't Want Your Drugs" today via STFD. Buy / Stream - orcd.co/idontwantyourdrugs Watch the video - www.youtube.com/watch?v=KJ-o24vqdTU“This song is about drugs. The dirty kind, including toxic relationships. The highs and the lows and all the in-betweens. The blank stares at paint-chipped walls, the empty words spilling over wine, and the ego-fuelled trip into Wonderland that you get spat out of and eventually end up with nothing to show but emptiness. And we don’t want them. No more lies, no more delusions, and no more blood. Don’t need those dirty old drugs to drive, now do you? Leave em be…” comments drummer Andrew Middelkoop on the inspiration behind the track. He goes on the explain more about the video, "The video itself, put together by the fantastically talented Owen Wilson, is a visual representation of everything the song talks about. The video compiles both live footage from an Armchair show as well as footage from Alex’s tattoo studio; juxtaposing the duality of life's varied experiences. All the effects used represent the adrenaline rush one feels from performing in an unpredictable live setting, as well as in a controlled environment. This speaks volumes to the unpredictability and imposed predictability of life, and relationships; people are a drug too, and sometimes we realise that far too late. Crazy colours, crazy lights, and crazy energy provide a visual outlet for the idea toxicity can, and often does, come from anywhere, anytime, anyhow." #wekillcowboys #idontwantyourdrugs #psychedelic #rock #punk #STFDRecords #plugmusicagency ... See MoreSee Less
View on Facebook
· Share