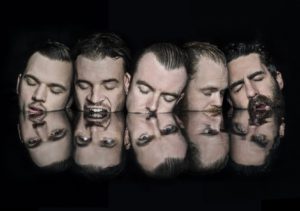 Revolution is a chaotic and unbalanced affair. It challenges the state of things and, for those who revolt against the status quo, it bears both great risk and reward. These truths are as vital in art as they are in any other realm and it is within these redefining forces that Australian hard-rock architects, Karnivool thrive. With their acclaimed 2005 debut, ‘Themata‘ and 2009’s ground breaking follow-up, ‘Sound Awake’, Karnivool established themselves as one of the most vital forces in progressive modern music.

Karnivool belied expectation again with their third album, ‘Asymmetry‘ in 2013. This brazen, introspective and expansive work was designed in the band’s Perth studio over two years and recorded with legendary producer Nick DiDia (Rage Against The Machine, Mastodon).

Karnivool have toured extensively in Australia and worldwide, making appearances at Sonisphere (UK), Rock AM Ring/Rock IM Park (Germany), and Download Festival to name a few.

An album of extraordinary beauty and depth. – **** Kerrang

Asymmetry is their best yet. A cavalcade of spiky riffs softened by ethereal moods. – **** Q Magazine

This is scintillating, widescreen rock music that eschews traditional formulae in favour of a hypnotic, ever-changing hybrid of ideas. – 8/10 Metal Hammer

One of the most exciting progressive alt-rock bands to emerge in years. – ***** Total Guitar

Watch Karnivool’s “We Are” music video below:

Tickets are on sale nationwide through www.computicket.com , as well as at Computicket outlets and Checkers stores.