Krank’d Up announce Animals As Leaders as 1st International Headliner

Fans of intricate, mind-bending prog are in for an unforgettable treat courtesy of SA’s ever-flourishing KRANK’D UP music festival with the announcement of ANIMALS AS LEADERS as its first confirmed international act of 2017.

Emotional resonance and sheer technical virtuosity blended in a fusion of metal, jazz and djent has become the signature sound of acclaimed prog captains, ANIMALS AS LEADERS. Standing at the forefront of the progressive instrumental metal movement, ANIMALS AS LEADERS will be bringing their much-lauded repertoire to the KRANK’D UP stage in September. With four releases under its belt, the band continues to smash boundaries and wow audiences worldwide having headlined tours with the likes of Intervals, Veil of Maya, Plini, Dead Letter Circus and Intronaut. Now South African fans can experience the raging fire that isANIMALS AS LEADERS live in our own backyard at KRANK’D UP 2017.
Listen to ANIMALS AS LEADER’S “Arithmophobia” below:
https://www.youtube.com/watch?v=lfKrjZWG09c
KRANK’D UP will be held at Sundowners, Alberton, on September 30, 2017. Tickets are available right now from Computicket. Keep an eye on the Krank’d Up music festival and Turning Tricks Entertainment social pages as more exciting announcements will be made. 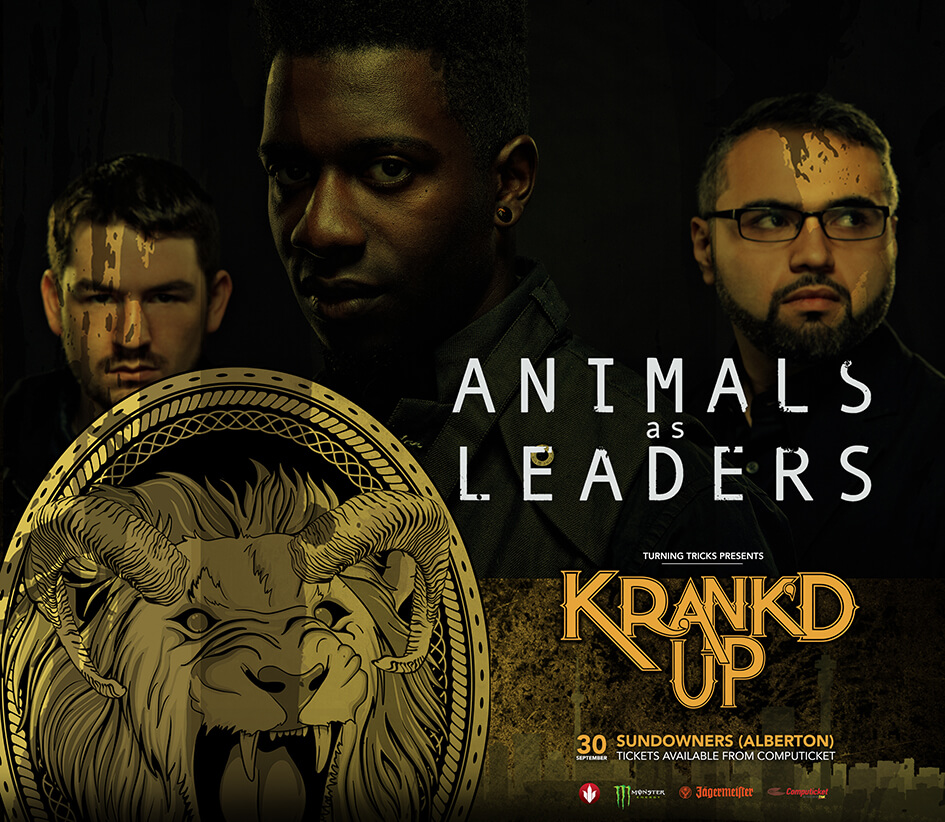 KRANK’D UP Ticket Prices:
Early bird tickets are now available from Computicket at R350 each until May 31st. Full price tickets will be available from June 1st at R500 each. Limited VIP tickets are available through  http://www.krankdupfestival.co.za
Tickets are on sale nationwide through http://www.computicket.com , as well as at Computicket outlets and Checkers stores.
KRANK’D UP 2017 is sponsored by Monster Energy and Jagermeister.
Keep up to date with the latest KRANK’D UP news and announcements by joining the official Facebook page: http://www.facebook.com/KrankdUpMusicFestival