The Blues Broers 1 night only at Atterbury Theatre

“2014 was a great year for us. We spreading the word far and wide,” says Simon Orange, keyboard player and songwriter for South Africa’s original blues/rock band, the Blues Broers. Since the launch of their latest album ‘Into the Red’ in January 2014 they’ve performed at the Standard Bank Jazz Festival in Grahamstown and appeared on the major TV networks. They featured on the Durban International Blues Festival and at the Table Mountain Blues Summit amongst others. They are back at the Atterbury Theatre on Tuesday 1 September for another performance for their loyal Pretoria supporters.

Twenty-five years ago the musical landscape was very different. The Blues Broers started out playing in Cape Town’s seedier clubs and bars. Venues like The Fringe and the appropriately named Smokehouse (some nights you could barely see the stage through the blue haze of cigarette smoke) are long gone, but the band expanded its audience by driving long hours to towns further afield. It was around this time that they added their ‘Skiffle set’ to the show. Skiffle is music played on homemade instruments, such as a tea-chest bass or tin washboard and it’s still an important part of the band’s performance.

Coastal tours, album releases and rock festivals followed, but in 1999 the band lost drummer, manager and Albert Frost’s father, Frank, to cancer. It was a blow they struggled to recover from and eventually the Blues Broers announced that they were calling it a day. In 2006 they held a final show at the Hidden Cellar in Stellenbosch.

The band was brought back together by popular demand for a reunion gig in 2009 and they soon started writing songs that would feature on their 2011 CD release ‘Out of the Blue’. That album’s success gave a whole new lease of life to the Blues Broers. Now Albert Frost’s mother, Maggie, manages the band and is married to bass player Rob Nagel. Albert says “I’m probably the only guitarist who’s played in the same band with two dads!”

.The Blues Broers are: 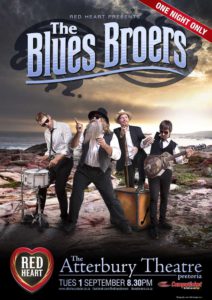