2 to 6 April 2015 sees the biggest metal festival ever to take place on African soil. Witchfest Open Air 2015 has moved to a new venue and will now be held at the Crocodile Creek Concert Venue, located less than 3 min from the Lanseria airport and close to all major roads and freeways, thus making it easier for fans to get to the festival. Crocodile Creek is the same venue that hosts the monster JOBURG DAY festival, so it is well equipped to handle #‎WFOA2015. Featuring some of the biggest international names in the metal world with the likes of Cannibal Corpse, Hatebreed, Epica and Decapitated (to name just a few)joining the bill. This ensemble of international metal awesomeness will also be supported by the very best the South African metal scene has to offer.The festival is set to make history as the first of its kind in South Africa. 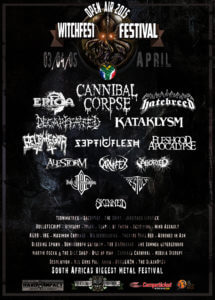