You might not think it to look at them, but CrashCarBurn are massive rugby fans! Like any other proud South African who’s blood runs green, the CrashCar boys are staunch supporters of the Boks. Their latest single ‘Anthem for Warriors’ is thunderous tribute to the Bok heroes of the past, and a battle cry for the current squad on their way to the 2015 Rugby World Cup.

‘I was lucky enough to have experienced the famous ’95 Bok win when I was just a kid,’ recalls front man Garth Barnes, ‘I still clearly remember people spilling into the streets after the game…hanging from cars windows with flags, singing, hooting and celebrating. It was magical to witness how a whole nation put aside a dark history to stand together. Troubled times politically and economically in South Africa….we could use some of that magic in South Africa right now’.

So here it is, ‘The Anthem of Warriors’, and the message is clear: best of luck to the 2015 Bok squad, the nation is behind you, and in the words of our esteemed Sports Minister: Moer Hulle Dood! 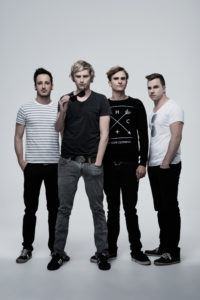